His Holiness presided the meeting from MTA Studios in Islamabad, Tilford, whilst the attendees joined from the Aiwan-e-Tahir Hall in Peace Village, Toronto.

Following a short formal session starting with the recitation of the Holy Quran, the attendees had the opportunity to ask His Holiness a series of questions regarding their faith and contemporary issues.

One of the questions related to the concept of prayer and how one could pray to Allah the Almighty in the most effective manner.

The questioner also mentioned that whenever he writes to His Holiness for prayers he has found that his prayers are accepted quickly.

“This is a blessing of Allah the Almighty upon you that in order to strengthen your faith He resolves your matters when you write the letters to me. So this is the favour of God.”

“You should seek to strengthen your faith and become ever more devoted in your prayers to Allah the Almighty. He has taught us the means for praying, which is to observe the five daily prayers and He has taught us that if we wish to even go beyond that then there are the voluntary prayers that should be observed and that you should weep within prayers whilst beseeching Allah the Almighty. Ardently pray whilst adopting a condition of great yearning and then Allah will accept the prayers.”

“You should assess yourself to see if your condition is such that you have a firm and complete faith that Allah the Almighty listens to your prayers and accepts them and that your faith and religion is the final religion. Even if Allah the Almighty does not accept your every prayer, then that is up to God and your certainty of faith ought never waiver.”

“Allah the Almighty is not bound to accept every single prayer. This is the choice of Allah the Almighty; He knows better which prayers to accept. Even the prayers of a true believer, in fact, even the prayers of the prophets are at times accepted and at other times they are not. This is because the relationship (of a believer with Allah) is akin to friendship; sometimes you do as your friend says and other times you do not. This is the concept of prayer given to us by the Promised Messiah (peace be upon him).”

His Holiness said one’s faith should not be like the case of some birds that land upon a field when there is harvest and plenty for them to eat. However, they fly away when their feed runs out.

“It should not be that when we are in need we come, gather together and turn to Allah the Almighty and present ourselves to Him and then when our issue is resolved we forget about God and become indulged in worldliness. So in order to pray properly, one must be consistent and adopt a fervency in the prayers and we must perfect our certainty of faith.”

Another questioner asked how children can be protected from those concepts and beliefs taught in Western schools and society that do not align with Islam’s moral code.

“Make a relationship of friendship with your children. The child should know that his mother is his friend and he must share everything with her. The child should know that his father is not harsh and insensitive. He should know that his father will not shout at him or hit him – rather, he is a friend. Then one’s child will share everything with his father. Especially when children reach the age of thirteen or fourteen, they begin to become wary and more distant from their fathers. At such an age, the father should particularly try to bring the children closer to himself and build a friendship. If they discuss whatever they learn at school with you then you will be able to guide and discuss with them the good and bad aspects of what they learn.” 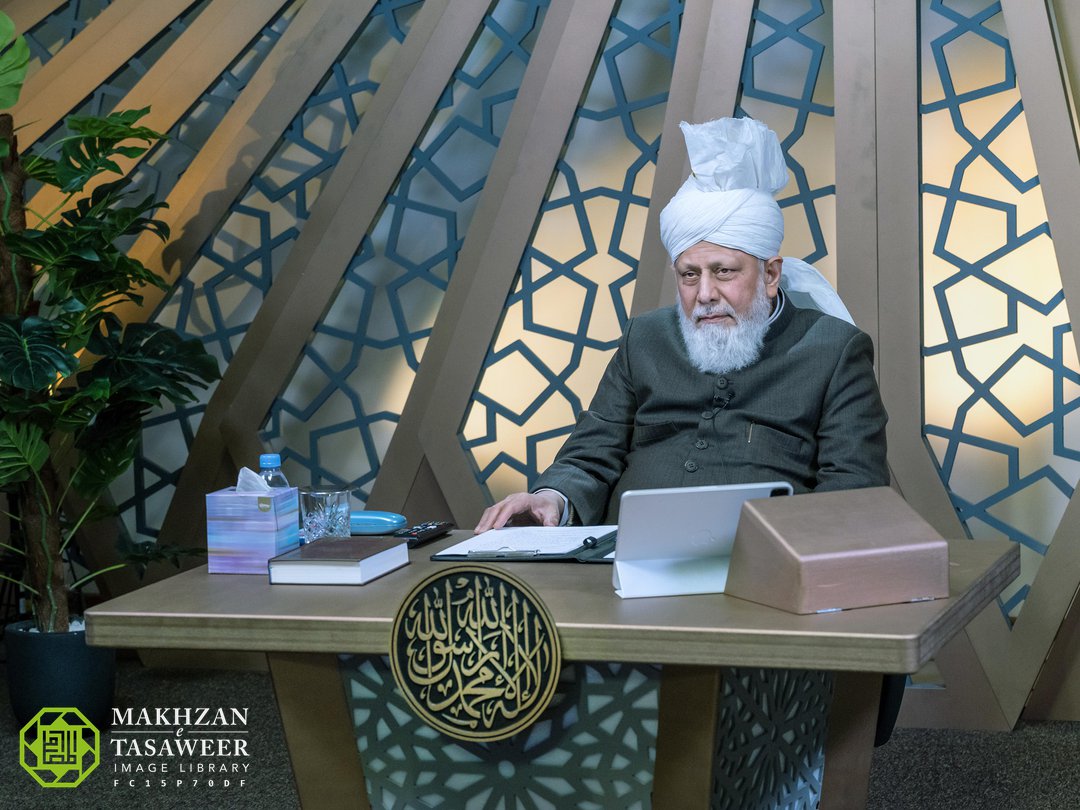 “Whatever they learn at school, you will have to discuss it with them and explain it to them when they ask a question. However, if you become angry then they will think that their father and mother do not have the answers to their questions and so what they are learning outside the homes is correct. They will think that their parents are ignorant and uneducated. Therefore, you will have to stay aware of the new trends of the time. We have to go beyond our traditional thinking. Now that the times have changed, in order to save our coming generations, we will have to keep ourselves informed.”

One of the attendees asked His Holiness about his views on why the Arab world is presently suffering.

“What was the reason for the initial downfall of the Arab nations? It is still the same reason. When God Almighty is abandoned and instead, the major worldly powers are considered as gods and when this is the case for countries as strong as Saudi Arabia all the way to the smallest of Muslim states, then of course the protective Hand of God is lifted away from such a people. Furthermore, there is a negligence in following the commandments of God and they have utterly misused the wealth that Allah the Almighty has blessed them with.”

His Holiness mentioned that despite having vast wealth, Islamic countries are not using that wealth to help the cause of Islam.

“The wealth that Allah the Almighty has given [to Arab countries], what benefit have they derived from it? How have they served the faith through it? The Ahmadiyya Muslim Community is a community with meagre resources which is working in the world to spread the message of the Holy Quran through donations. On the other hand, even small (Muslim) countries, their six-month expenditure or monthly government expenditure is more than the entire annual budget of the Ahmadiyya Muslim Community! However, what service are they carrying out for the sake of Islam? They think that [it is sufficient to] simply oppose the Ahmadiyya Muslim Community and the Promised Messiah (peace be upon him) and pass edicts of disbelief.”

“When we truly develop a faith in God and follow His commandments, then these same countries will begin to progress. The Muslims are not a small power in the world. They are 54 countries! They can achieve a lot. However, by becoming indulged in sectarianism and worldliness they have created division. It was in the sayings of the Holy Prophet (peace and blessings be upon him) that when there is hypocrisy within the Muslims then their progress will halt. At that time there will be disorder and a person will come to bring people together and so he commanded for us to attach ourselves to that person when he comes. He prophesied that if you attach yourselves to him then you will save yourselves, otherwise you will not.”

In reply to another question related to the disorder in many Arab countries, Hazrat Mirza Masroor Ahmad said:

“Muslims are relying upon others and killing one another despite the fact that Allah the Almighty has said that killing another Muslim is a grave sin. Further, they are asking for the help of non-Muslims in killing other Muslims. So then, when the non-Muslims come to your aid, they will force you to accept their terms and conditions. Amongst their conditions will be to take a part of your wealth. When these countries take a part of the wealth, they do not take a small part. Then also, because there is a lack of honesty, the leadership of the Muslim countries unjustly keeps much of whatever is left over and so the poor public becomes weaker and weaker. In turn, these [non-Muslim] powers gain another opportunity and they say that because the public has become poor, we will give you aid and thus, they have an excuse to meddle again. So this is a vicious cycle which is running and will continue to churn until the Muslims realise that they must stand upon their own two feet and that they must use their own minds and capabilities to utilise their wealth and resources and make the correct use of them.”