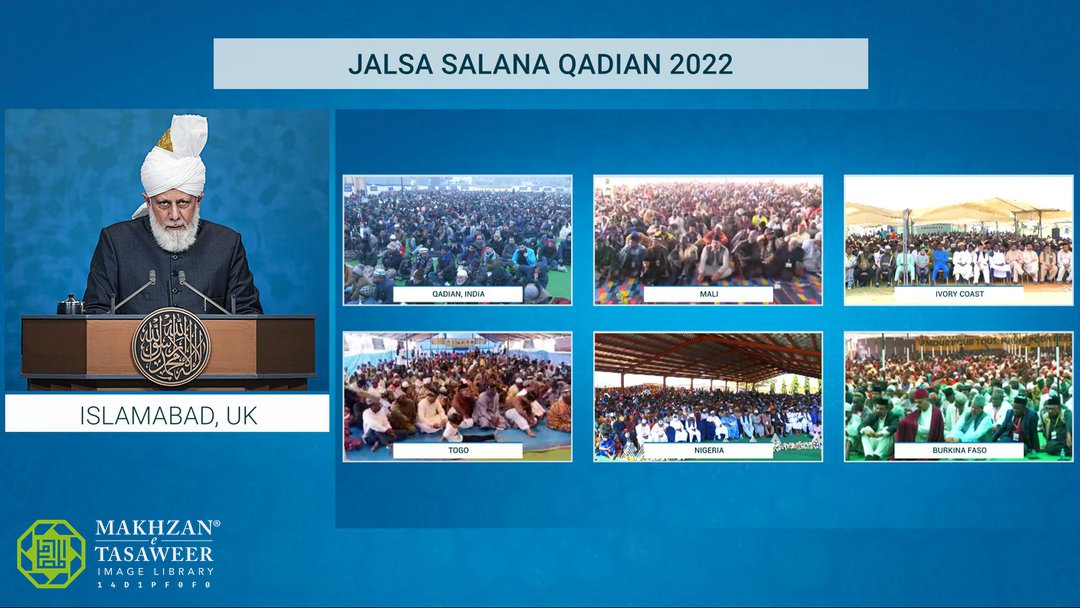 His Holiness presided the concluding session virtually from the Masroor Hall in Islamabad, Tilford. More than 14,500 people gathered at the Jalsa site in Qadian.

The concluding sessions of the other African countries include the nations of Nigeria, Ivory Coast, Guinea Bissau, Guinea Conakry, Togo, Burkina Faso, Mali and Zimbabwe.

Beginning his address, His Holiness outlined that the first Jalsa officially held in Qadian in 1891 had just 75 attendees. The following year 327 people attended the Jalsa. 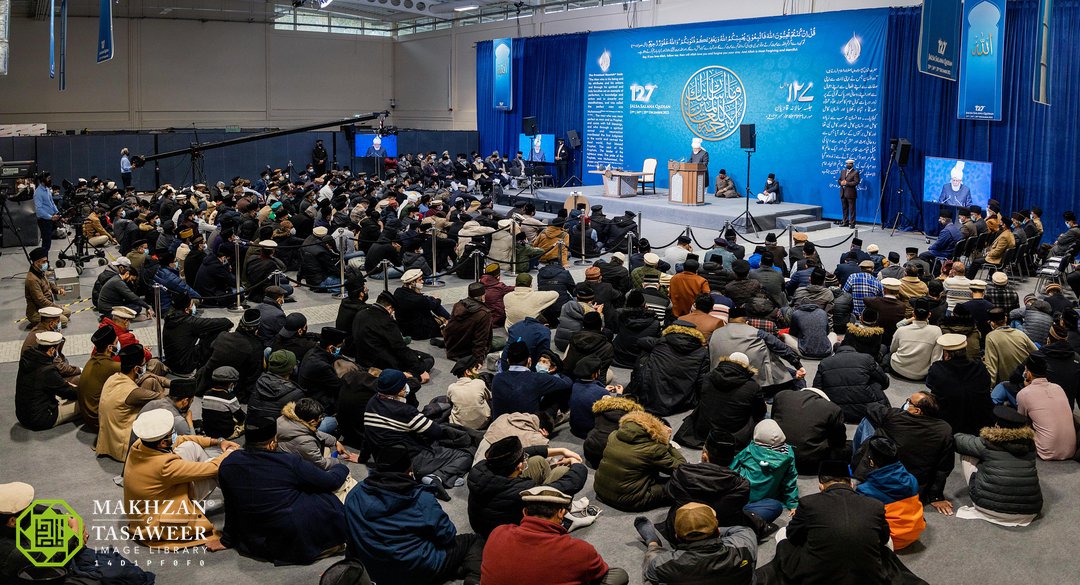 Outlining the bounties of Allah upon the Ahmadiyya Muslim Community since, Hazrat Mirza Masroor Ahmad said: 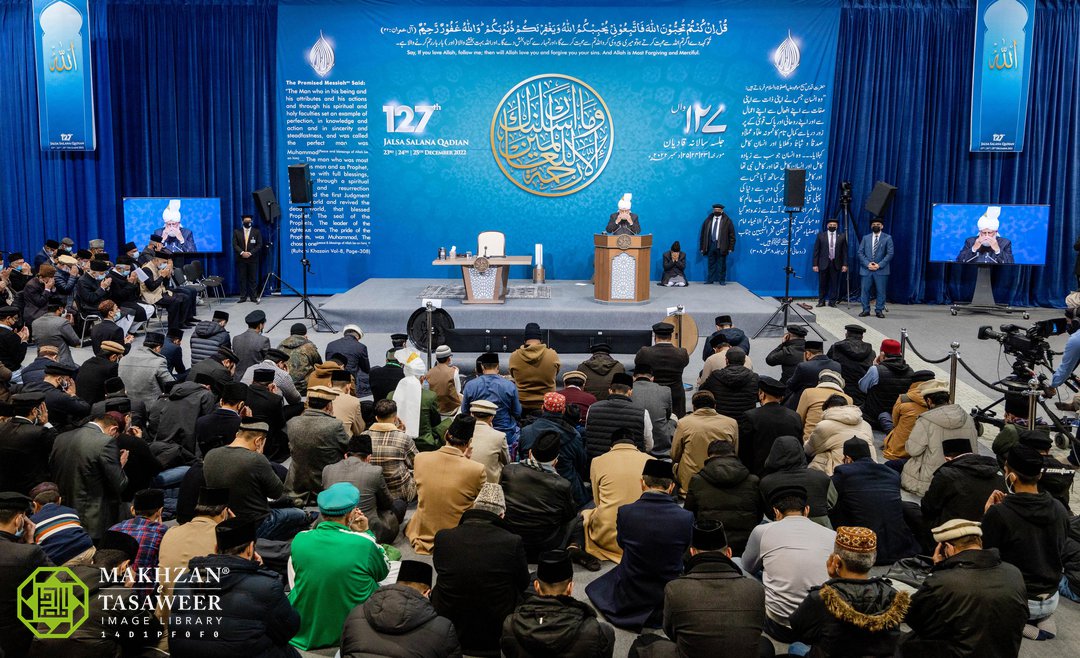 His Holiness went on to emphasise that those who attend the Jalsa Salana must ensure that they try to fulfil their religious obligations and in this regard, His Holiness spoke in detail during his address about the second condition of Bai’at [Oath of Allegiance] to the Promised Messiah (peace be upon him).

The second of the ten conditions states:

“That he/she shall keep away from falsehood, fornication/adultery, trespasses of the eye, debauchery, dissipation, cruelty, dishonesty, mischief and rebellion; and that he/she will not permit himself/herself to be carried away by passions, however strong they might be.”

His Holiness said that nine vices have been mentioned in this condition which must be avoided by a true Ahmadi Muslim.

Speaking of the evil of falsehood, Hazrat Mirza Masroor Ahmad quoted several verses of the Holy Quran including chapter 22 verse 31 which states:

“Shun, therefore, the abomination of idols, and shun all words of untruth.”

“Such clear warning from Allah the Almighty should be enough to shake us to our core. We ought to assess ourselves in minute detail to see that we act in accordance with what Allah the Almighty desires of us. Lying is such a grave sin that it has been declared parallel to idolatry…The standard set by the Holy Prophet Muhammad (peace and blessings be upon him) was so high that he said that to even speak an untruth as a joke is in actuality a lie. These are the standards we must aspire to attain.”

His Holiness also addressed the sin of fornication and said that through the media, the current day and age has surpassed all limits and deteriorated in indecency like never before. 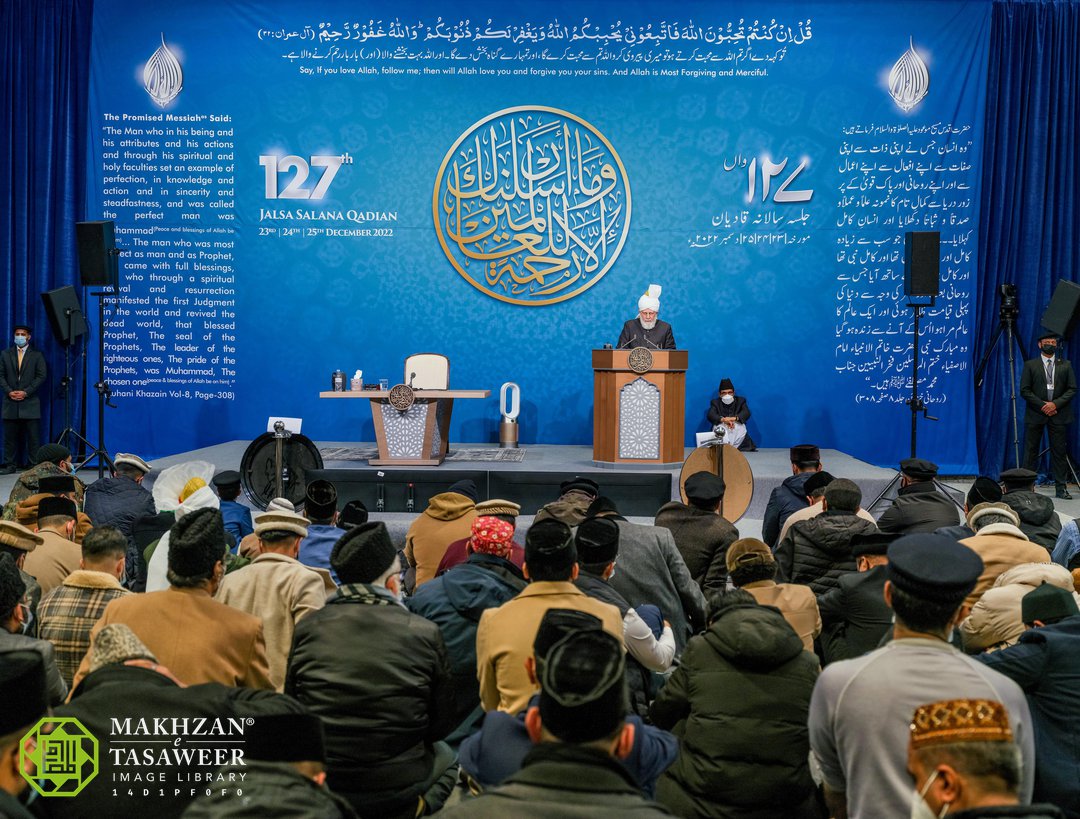 “And go not nigh unto adultery, surely, it is a manifest indecency and an evil way.”

“Fornication incorporates all kinds of indecent behaviour, including anything that leads to evil, indecency and shamelessness…Where we as Ahmadi Muslims must remain away from this evil and keep our progenies safe from the indecencies which are spreading rapidly within society, we must also ensure that we play our part in trying to make others understand its harms in order to try and create a better society. Spreading this evil of indecency and fornication is in fact an atheistic agenda. Those who wish to drive people away from religion, they have it as part of their motive to try and bring people towards indecency. Therefore, we must try our utmost to become a part in fighting a spiritual Jihad of establishing morality.” 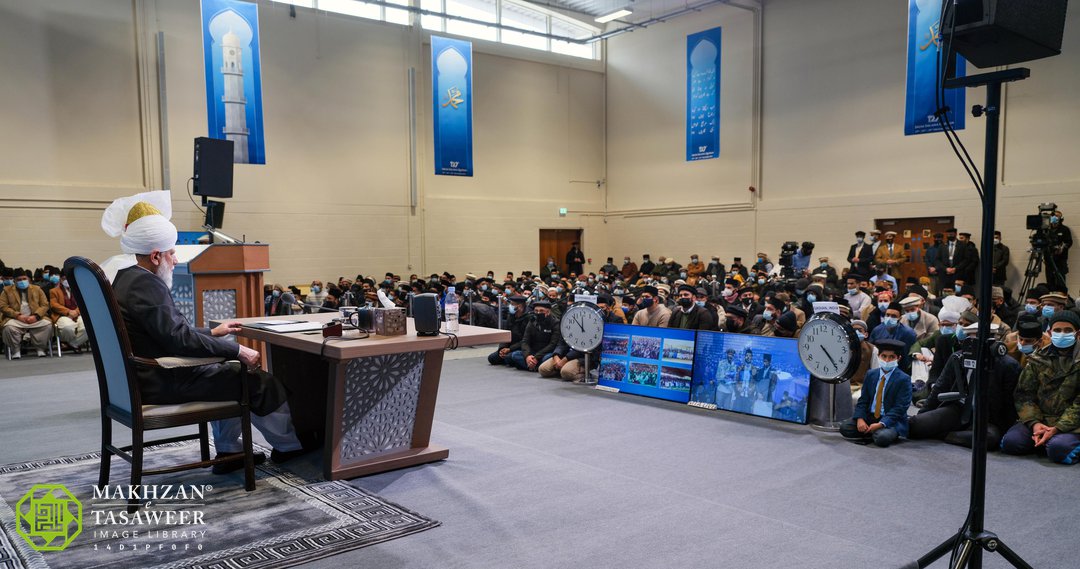 His Holiness said that in the sayings of the Holy Prophet Muhammad (peace and blessings be upon him) there are prophecies that a sign of the latter days is that fornication would become widespread, and this has been fulfilled in this age.

Speaking of another vice mentioned in the second condition of Bai’at, His Holiness emphasised that carrying out any injustice against anyone is wrong.

His Holiness narrated a Hadith, in which the Holy Prophet Muhammad (peace and blessings be upon him) has said, ‘Save yourselves from the prayer of the one who has been caused an injustice because there is no barrier between him and Allah the Almighty.’ 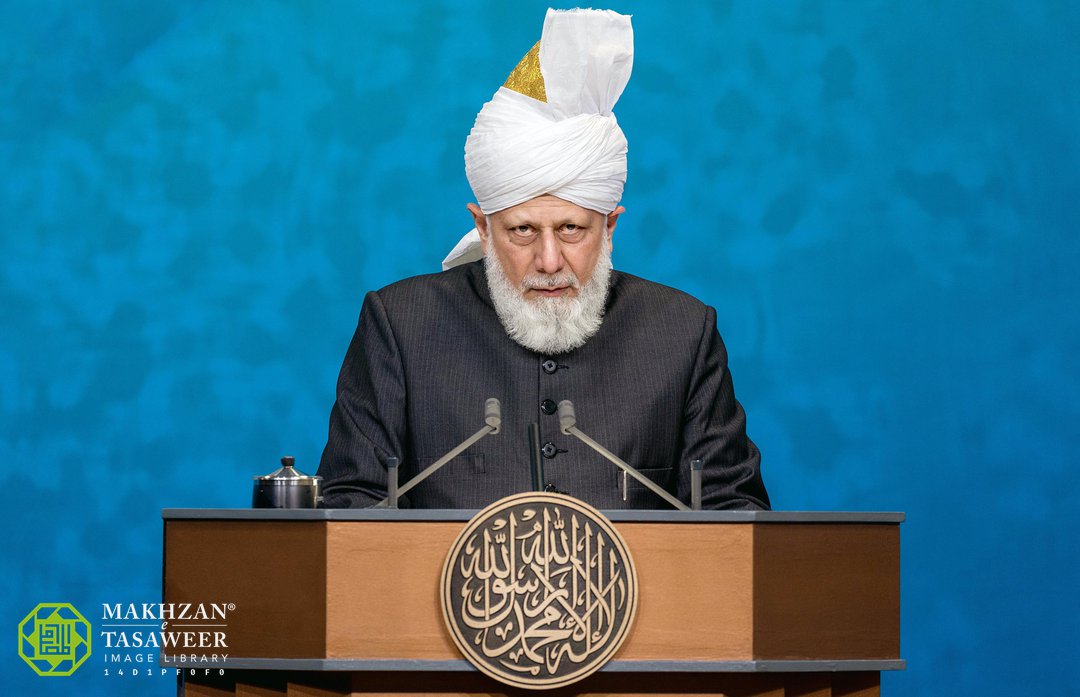 Another evil His Holiness advised against during his sermon included the evil of creating disorder. 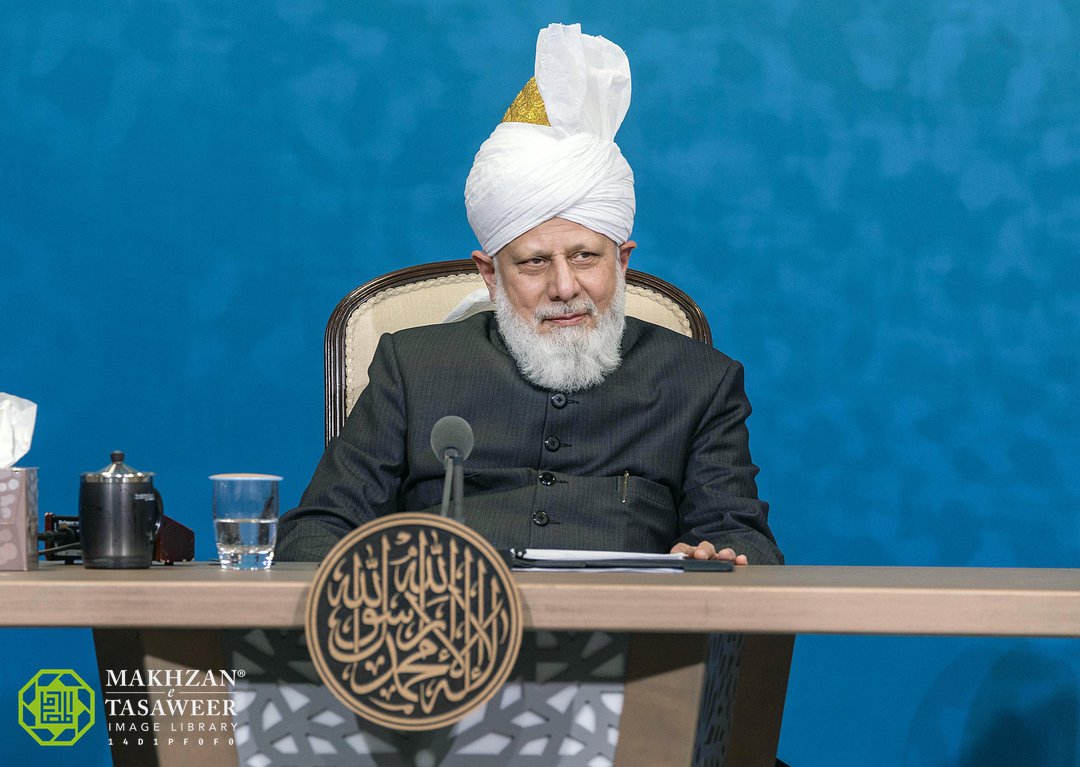 Having highlighted the various vices that every Ahmadi Muslim must avoid, Hazrat Mirza Masroor Ahmad said:

“This is what should serve as our guide. If we spend our lives in accordance with this, we can create a true moral revolution in the world. Every condition of Bai’at contains within it an endless array of wisdom. An Ahmadi Muslim should continue to ponder over them in order to keep his faith alive. Only then can we fulfil the obligations of Bai’at.” 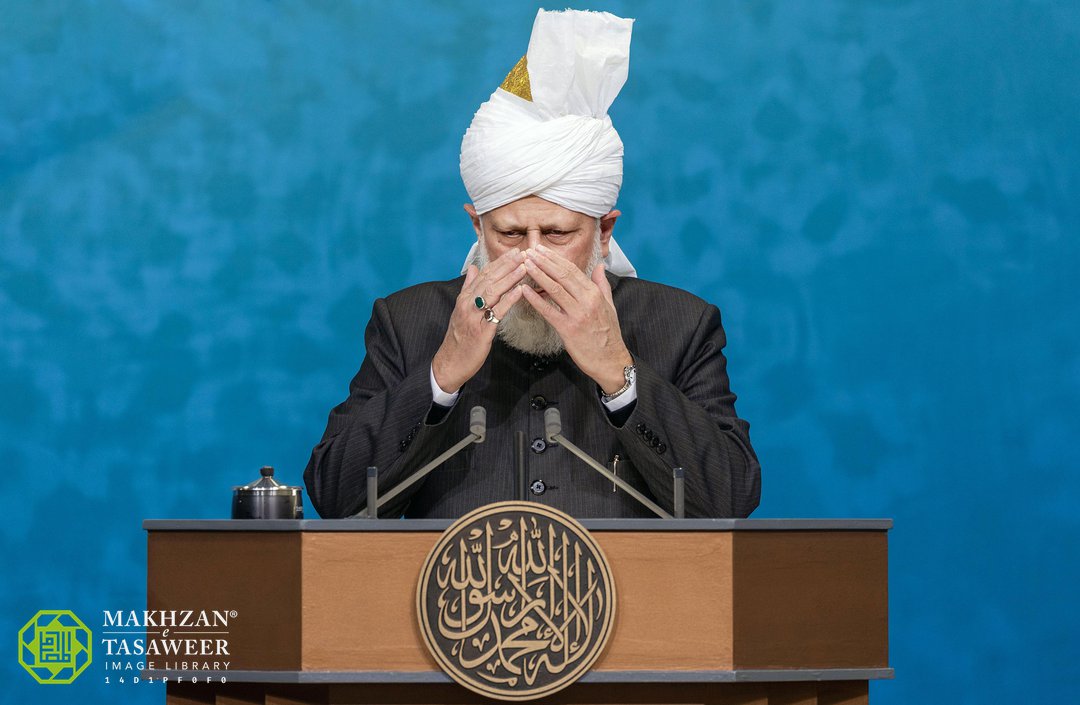 As he concluded his address, Hazrat Mirza Masroor Ahmad said:

“Today Lajna Imaillah has reached the hundred-year mark since the inception of their organisation. Lajna must remember that they ought to evaluate how they have spiritually reformed themselves in the past hundred years and whether they have made themselves worthy of being able to fulfil the obligations of taking the Bait. To what extent have they endeavoured to do so and to what extent have they attached their progenies with the oath of allegiance to the Promised Messiah (peace be upon him)? If we have brought up our children in line with this objective, then certainly the Lajna Imaillah are grateful servants of Allah the Almighty. We must assess ourselves with this objective in mind today. Wherever there is any weakness that has occurred, then Lajna Imaillah members must try to pledge with sincere fortitude that they shall enter their new century with the pledge to make their future progeny into such people who fulfil the obligations of taking the Bai’at.”