His Holiness presided the meeting from MTA Studios in Islamabad, Tilford, whilst the Khuddam aged 15-25 joined the meeting virtually from the national headquarters of the Ahmadiyya Muslim Community, the Baitur Rahman Mosque in Maryland.

After the formal session, which began with a recitation of the Holy Quran, His Holiness, Hazrat Mirza Masroor Ahmad launched the new Strive mobile application developed by Majlis Khuddamul Ahmadiyya USA to encourage Khuddam to offer Salat, to help them increase their religious knowledge through interactive quizzes and other means.

“May Allah the Almighty make it a source of blessing and knowledge for MKA United States.”

Thereafter Khuddam were able to ask questions on a range of religious and contemporary issues.

One Khadim asked how His Holiness was able to achieve certainty in the existence of God and if any specific event occurred that strengthened his belief in God.

“I was brought up in such an atmosphere where the environment was such that I never felt that God does not exist. Even through my personal experiences from childhood I knew that for all my requirements and desires, or to get anything I will have to bow before Allah the Almighty and ask Him and beseech His help. And later, at the age of 14 or 15, I experienced myself that there were some occasions when if Allah the Almighty had not helped me, I would not have succeeded in my secondary school examinations. That strengthened my faith. Even after that, there were so many occasions. When I was going to get my Master’s degree, at that time also I was very much anxious and I was not feeling comfortable. So, at that time, Allah the Almighty comforted me by showing me one of the revelations of the Promised Messiah (peace be upon him) and that satisfied me and it proved to be a true dream that I saw. So it again strengthened my faith. So, there were so many occasions that I experienced – from childhood to today – that Allah the Almighty is showing His signs.”

Another attendee mentioned that the conditions in the United States were worsening in terms of racial tensions, nationalism and economic disparity. He asked how Ahmadi Muslims can play a positive role in resolving such issues.

His Holiness said that such tensions were not limited to the United States, rather a large number of other Western countries also faced similar problems.

“Not only in the United States – in so many Western countries the popularity of rightists and racists is increasing. Even in the recent war between Russia and Ukraine, those people who are migrating from Ukraine to the European countries include quite a number of immigrants who are Asians, Africans, and [people from] some other nations. But, when they reached European countries such as Poland and they crossed the border, [the people of those countries] were saying they will only accept local Ukrainians; not the foreigners. That also shows that there is some racism there and they [the foreigners] were maltreated.”

His Holiness mentioned that Humanity First is serving in the neighbouring countries of Ukraine and is helping the refugees fleeing Ukraine.

Advising the Khadim about what role Ahmadi Muslims can play amid the rising nationalism and racism, Hazrat Mirza Masroor Ahmad said:

“You see, it needs justice and absolute justice. So you tell your countrymen that Americans are not the natives of this country… So they did not do justice with the Native Americans and they are not considered as ‘first class’ citizens of the country. Although they claim [that they are,] but practically their rights are being denied in so many ways. So, you tell them that this cannot work for a longer period. Secondly, they brought Africans to their country, either in the form of slaves or otherwise. So, since they brought the Africans into their country and because they played a vital role for developing the country – so the African Americans should be respected. They should be given due rights. Tell them (the American leaders and people) that they should realise this fact. Otherwise a time will come when there will be revolt. People will stand up against them [those who are racist].”

“This is the time that they [the racist people] should change their mind and instead of being racist and showing supremacy of their colour and race, they should rather do justice. This is how we can tell the people that we are your real sympathizer. We want you to change your mindset and now live together amicably, with all other races. Now, America is a multinational country. There are South Americans, Eurasians, Asians, Africans there and white Americans, so now we should respect each other and live amicably in the country. Otherwise, we are going to doom our nation and our country. So this is the message we have to spread everywhere and Ahmadi Muslims should play their role in this regard.”

Another question asked what some of the ways were that His Holiness was able to stay attached with Khilafat in his younger years. 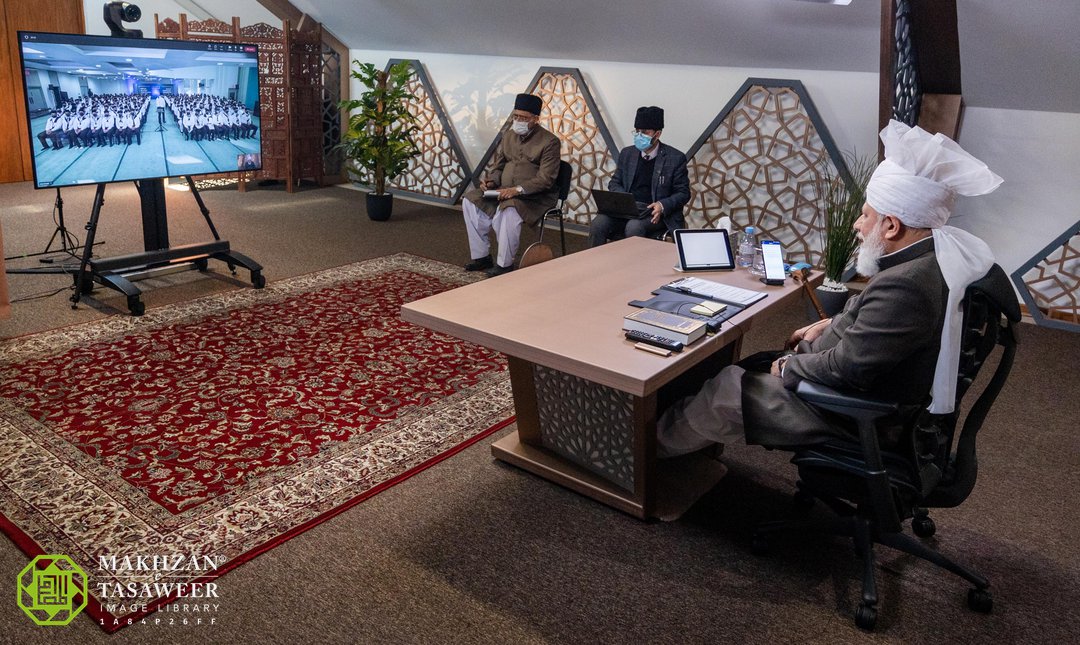 A Khadim also asked for His Holiness’ advice on how to become a good husband and parent.

“You yourself have to be very much humble and nice in this regard. Don’t think that any person in this world is perfect. If a husband and wife understand that neither of them is perfect, everyone has some shortcomings in them, so they should give margin to each other. Instead of getting annoyed or start quarrelling or fighting with each other because of their shortcomings, you [should] always see the good things in them. So, instead of finding shortcomings in each other, you should try to find good things in each other. So that is the only way you can be a good husband.”

Advising him about how to be a good parent, Hazrat Mirza Masroor Ahmad stated:

Another Khadim asked His Holiness that with the worsening situation between Russia and Ukraine, how can Ahmadi Muslims spread the guidance of His Holiness to their elected officials.

“My statement was issued at the very beginning [of the conflict]. So you should spread that message to your politicians, to you leaders, and tell them that avoid this war, otherwise there is going to be a very big havoc. The world is going take years to redevelop and to come back to the present position. Not only that – I have already written in that statement – that our future generations will also suffer. If the world war erupts then they will definitely use, if not nuclear weapons, at least chemical weapons. And that will also leave a very bad effect on our future generation… So tell them. The message is already there, my statement is there. So you can spread that message.”

https://loveforallhatredfornone.org/majlis-khuddamul-ahmadiyya-usa-have-honour-of-virtual-meeting-with-world-head-of-ahmadiyya-muslim-community-2/
Previous story
Leicester Peace Conference Promotes Global Unity
Next story
Members of Majlis Atfal-ul-Ahmadiyya from Norway have Honour of a Virtual Meeting with Head of the Ahmadiyya Muslim Community