On 8 January 2022, the World Head of the Ahmadiyya Muslim Community, the Fifth Khalifa (Caliph), His Holiness, Hazrat Mirza Masroor Ahmad held a virtual online meeting with members of Majlis Atfal-ul-Ahmadiyya from Nigeria.

His Holiness presided the meeting from MTA Studios in Islamabad, Tilford, whilst more than 40 Atfal joined the meeting virtually from the Lajna Hall in Ojokoro in Lagos, Nigeria.

Following a formal session starting with recitation of the Holy Quran, members of Majlis Atfal-ul-Ahmadiyya had the opportunity to ask His Holiness a series of questions regarding their faith and contemporary issues.

One of the Atfal in attendance asked His Holiness what a child should do if he is bullied and threatened by other children not to tell his parents about being mistreated.

“You should not be afraid of anybody. You should tell your parents and to the teacher as well. You can also tell them that the person has threatened you that if you report this matter to anybody, he will bully you more and beat you. Ahmadi Muslims should not be afraid of anybody. So, if you want to reform the atmosphere of your school, then you have to be courageous.”

Another Tifl asked His Holiness how he can become righteous.

“Whatever Allah the Almighty has said, you should try to follow it. There are so many commandments given to us in the Holy Quran and there are some basic things; Allah the Almighty says, if you do them you will become righteous. Offer the five daily prayers and if possible, in congregation and pray very fervently without letting your concentration deviate. Concentrate solely on whatever you are saying. Then, read the Holy Quran daily, and try to know what are the commandments given in that portion which you have read… And try to behave well, [be] morally good. Try to tell good things to other people.”

“Concentrate on your studies because education is also something which is an obligation and a righteous person should always try to fulfil his obligations. After completing your studies, you can be a good asset for the Ahmadiyya Muslim Community and the nation. So, all these things together make you righteous.” 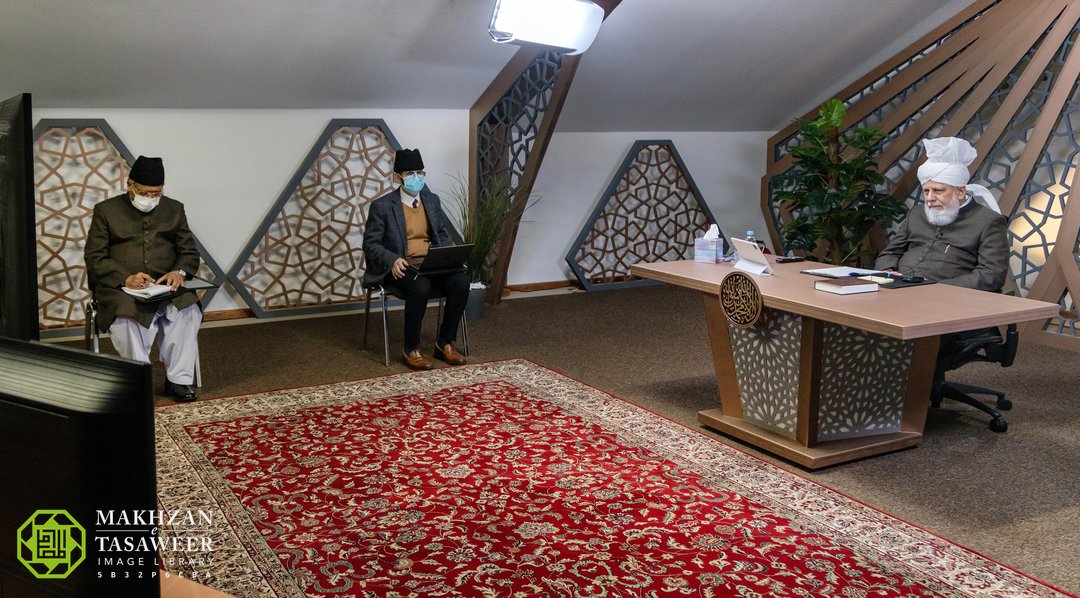 One of the attendees asked His Holiness what arguments he could use to prove the truth of the Promised Messiah (peace be upon him).

His Holiness mentioned that Islamic scriptures are clear that Jesus has passed away and the person who was to come, was to be a different person to Jesus of Nazareth (peace be upon him).

Explaining some of the numerous proofs in support of the truthfulness of the Promised Messiah (peace be upon him), Hazrat Mirza Masroor Ahmad said:

Hazrat Mirza Masroor Ahmad also referred to the prophecies found in the Holy Quran regarding the developments that were to occur at the time of the advent of the Promised Messiah (peace be upon him), including new modes of transportation which were unimaginable in the time of the revelation of the Holy Quran.

“So, these things have come to pass and there has been no claim of any other Promised Messiah. Jesus has not appeared, he has not come down, he has not descended from the heaven. So there is only one man’s claim and the prophecies have also been fulfilled and are being fulfilled by Allah the Almighty. So, these are the things which compel us to believe that the Promised Messiah (peace be upon him) has appeared and he is the right person.”

“Since there is no [other] claimant of this prophecy and there is only one person who claimed himself to be the [prophesied] person – and Allah the Almighty is also proving his appearance with all the support, and we are seeing that his community is flourishing day by day – so that shows that he is the right person. The time has also passed, and no other person will come now.”

Another questioner asked His Holiness about the issue of cybercrime affecting youth in Nigeria. His Holiness expressed his view that when young people become overly involved in online games it can eventually lead them down a dark path leading towards online crime or other vices.

“I have been saying for a long time that you should not involve yourself in playing online games which can make you go astray or deviate from the right path. The people who are making these type of games on the internet are actually spoiling the life of the people and younger people are becoming addicted to such online games. And as the time goes on, they become involved in some other bad things. So, Ahmadi Muslims should try to avoid these things because ultimately, they can lead people towards cyber crime. So, try to avoid these things if you want to save yourself. Only try to view good programmes on the internet.”