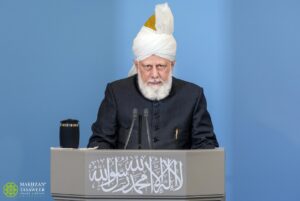 The city of Zion was founded in 1900 by John Alexander Dowie, who defamed the Holy Prophet Muhammad (peace and blessings be upon him) and called for the destruction and elimination of all Muslims. After attempts to persuade Mr Dowie to depart from the path of religious hatred failed, the Promised Messiah (peace be upon him) foretold that Dowie, despite him being almost 12 years younger than him and despite being at the peak of his powers, would die during the lifetime of the Promised Messiah (peace be upon him) as a sign from God of the victory of Islam. The prophecy was fulfilled to the letter on March 9, 1907, when John Alexander Dowie passed away. 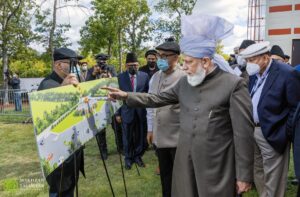 As His Holiness inaugurated the first Mosque of Zion, the sign of the truth of the Founder of the Ahmadiyya Muslim Community and the glory of Islam shone forth with a new light at the hand of the fifth successor of the Promised Messiah (peace be upon him). 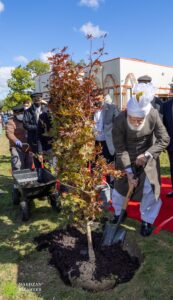 “Due to the historical significance of this city and the fact that a false claimant to prophethood – someone who used extremely foul language against the Promised Messiah (peace be upon him) – who then perished away, and given the fact that the Ahmadiyya Muslim Community is now established in that very city, are all such aspects which should make every Ahmadi Muslim grateful to Allah the Almighty.” 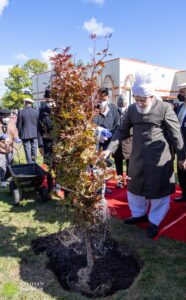 Arrival in the United States

His Holiness arrived in the United States late afternoon local time on Monday 26 September 2022. After landing in Chicago, His Holiness proceeded directly to the Fath-e-Azeem Mosque in Zion.

Upon arrival at the new Mosque, His Holiness was greeted by over a thousand Ahmadi Muslim men, women and children who were overjoyed at seeing their beloved Imam on his first tour abroad since the onset of the Covid-19 pandemic. 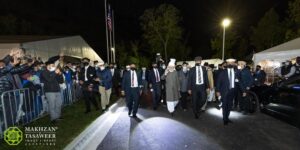 Unveiling of plaque and visit to Zion Mosque exhibition

Earlier in the week, on Tuesday, 27th September, His Holiness unveiled a commemorative plaque to mark the opening of the Mosque. 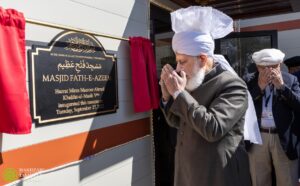 His Holiness also laid the foundation stone of the minaret that is to emblazon the grounds of the Mosque complex. 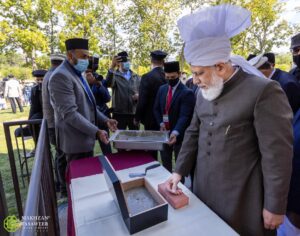 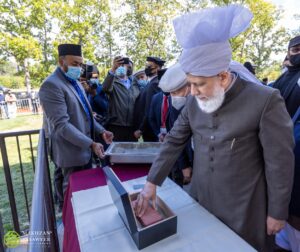 His Holiness also visited the Mosque complex, including a special exhibition hall that details the various aspects of the fulfilment of the prophecy and the numerous articles that were published in major newspapers of America at the time. 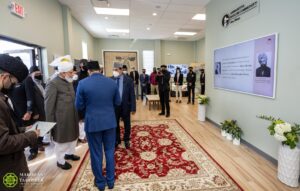 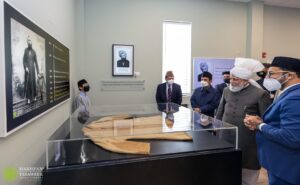 On Tuesday, 27 September, His Holiness was interviewed by Emily Miller, from the Religion News Service (RNS). She asked His Holiness about the objectives of his visit to the United States and about why Zion and the prayer duel between the Promised Messiah (peace be upon him) and Alexander Dowie was significant for Ahmadi Muslims and what was its significance for the wider world. 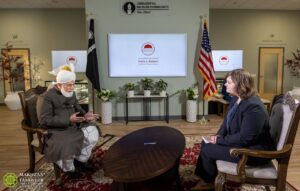 His Holiness spoke of how, where the demise of Alexander Dowie was a great sign in favour of the truth of the Promised Messiah (peace be upon him), it also served as a lesson to the world about the need to maintain mutual respect between the people of different faiths and beliefs and to show tolerance. He also stated that it was the duty of religious people to make other people realise the value of religion and that it was nothing to be feared. He said that Islam’s fundamental objectives were to bring human beings closer to God and to ensure that people fulfilled the rights of one another. 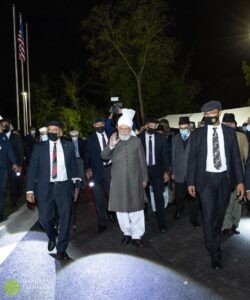 On Thursday, 29 September 2022, His Holiness also held a meeting with the Association of Ahmadi Muslim Scientists USA (AAMS).

His Holiness advised the scientists to strive to reach the apex of academic excellence to follow in the footsteps of the late Dr Abdus Salam sahib. His Holiness said that Ahmadi Muslim youth possessed the potential to do so and thus AAMS should ensure that every effort is made to help Ahmadi Muslims to fulfil their potential. His Holiness also encouraged researchers to excel in their fields and bring about innovative solutions to the problems humanity faces so that their research and work may benefit mankind. 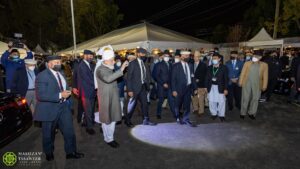 During the course of his week in Zion, His Holiness has met with dozens of Ahmadi Muslim families (family Mulaqats) individually and collectively, many of whom had the opportunity to meet His Holiness for the first time. 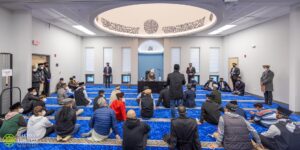